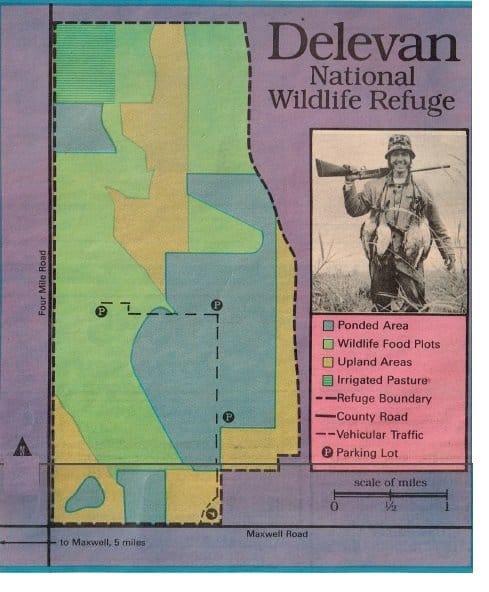 -Access to 80 Hunting Ranches and Clubs  for one monthly fee

-Best Areas and How to Hunt

Hunters in the Sacramento Valley  and bordering regions have quite  a few choices when it comes to duck  and goose hunting. But of all the public hunting areas in the Valley, the  Delevan National Wildlife Refuge  rates first or second,  especially for geese, and the hunting  reservations are usually fairly well  used up for the whole season.
The preserve can host up to 120  hunters for every shooting day, he  pointed out, whereas other local hunting grounds, like Sutter , can only accommodate  up to 80 hunters.  One of the reasons the refuge  may be so popular is that it  provides different kinds of  cover and habitat for a variety of ducks and geese.  Refer to our Delevan Refuge Map for more, stay tuned for our duck hunting refuge reports as the season progresses.
Delevan has upland areas at the  edges of the ponds, dense tule patches  and places with lighter cover. Most of  the ponds are shallow, and hip waders are at minimum required.  The best technique for hunting  Delevan Refuge duck hunting is to carry in your own blind  materials and make “same~day”  blinds. Delevan refuge is mostly wet, with a lot of planted ponds and maintained marshes, and doesn’t really have any dry  open ﬁelds.  Refer to our Delevan Refuge Map for more,stay tuned for our duck hunting refuge reports as the season progresses.
Although the Delevan Duck hunting refuge is almost at sea  level, and rarely gets too cold or icy,  wind and fog can both be problems.  Some limited visibility will increase  your chances of fooling geese and  ducks with a dozen or so decoys, but  thick fog also reduces your own  chances of sighting and downing  birds. For winter hunting, be sure and  call ahead for conditions.  Two county roads provide “scouting” opportunities for Duck Hunting aspirants. Refer to our Delevan Refuge Map for more, and stay tuned for our duck hunting refuge reports as the season progresses.
Data compiled from the Fish and  Wildlife Sen/ice’s forecast of northern  bird hatches and Pacific Flyway  migration patterns indicate that this  year should be a good one for goose  hunters.  Hatches on Wrangell Island off Siberia were both very good, so we should  see a lot of geese this year, also, the nearby California  resident populations of Canada geese  are doing fine. These geese are resident on the  Modoc Plateau, the Tule Lake Basin,  and as far down as the Honey Lake   Refuge.  Though is principally a wintering  aiea for migratory waterfowl   it does raise some ducks, primarily mallards,  pintails and teal.”
Delevan refuge draws a majority of light geese,  though whitefronts and Canada  honkers also show up at different  times throughout the season. Our mid-September survey shows a drop of 15 to 20  percent for ducks, but it’s really too  early to say what that means.  Locals think the total fall  ﬂight will be about the same as last  year.
The duck hunting take here is a mixed one,  with almost an even mix in the bag of pintails, greenwing teal, wigeon  and shovelers, in Califomia, the No. 1 breeding  duck is the mallard, but the resident  percentage of the hunter’s bag is  small, compared to the total.
The opener is always good, and  then it generally slacks off some in  November and early December, but if  the weather’s right, it can remain good  until the end of the season.  Storm conditions in local areas and  at points north of the refuge are important factors to be aware of, it’s the  storm conditions that push the birds  around and onto the refuge. There is usually a period that’s  really good at Christmastime for  geese and ducks both, when we start  getting a little fog.
You can hunt at Delevan from 1/2 hour before sunrise to sunset on Wednesdays, Saturdays and Sundays,  but you’ll need to make a reservation  before you head out up to 10  days prior to the day you want to hunt,  and the successful applicants’ names  will be drawn 7 days prior to that day.  Those whose names are drawn will be  mailed their permits. Stay tuned for our duck hunting refuge reports as the season progresses.

Access to 80 Hunting Ranches and Clubs  for one monthly fee

Hunting private lands in California has several advantages over the public areas. Chief among these are much less hunting pressure, better forage and water supplies and easier vehicle access.
We use a hunting map site that has over 200 private ranches, duck hunting clubs, blind rentals with or without guides www.ranchhuntfish.com
Click on a county for Hunting Clubs & Private Ranches:
www.ranchhuntfish.com