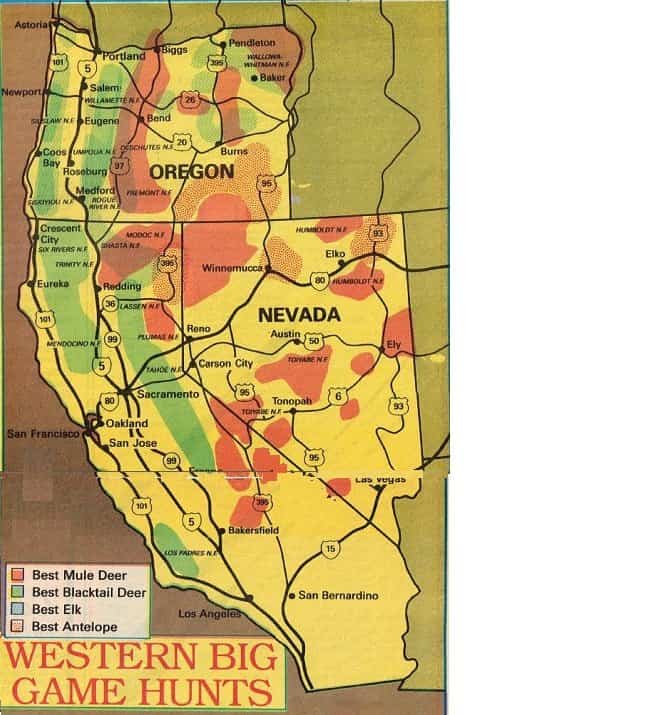 Spring is also the time of year to plan big game hunts for this fall, get excited thinking about hunting mule deer  season. And Northern California  Roosevelt elk hunting opportunities are expanded in Northern California.  Permits will be issued in  Siskiyou and Shasta counties.  Antelope hunting will be excellent as usual, and permits have been increased to improve opportunity.
DFG biologists say most deer herds fared very well through the mild winter and survival was high. California‘s diverse terrain affords numerous deer hunting opportunities. There’s something for everyone: the high desert terrain of Lassen  County where big mule deer live or the  lowlands in Zone A where there is easy  walking, plenty of blacktails and decent  access.
The entire state is divided into zones: A, B, D and X, and hunters must  choose one and hunt it the entire season. Zone A is a coastal blacktail season that opens July for archers and August for riﬂe hunters. Limit is two bucks per season, forked horn or better. An unlimited number of tags are available in this zone and most of the hunting is done on private property.
Success rate  hovers around 10 percent, but is somewhat higher in Mendocino and Sonoma  counties on the North Coast.  Zone B archery seasons open in July and August, with the riﬂe seasons opeing in September. Larger blacktail deer are available in this northwest region and success is best in the Trinity Alps and Weaverville area, where some huge blacktails are taken.
D zones cover most of the state and as a result they are most heavily hunted around October. The best deer hunting is in Northern California’s C4 zones where the highly populated Eastern Tehama deer herd lives.
D3 through D6 offer good hunting and access. Deer numbers are in good shape, particularly in D3, Central California‘s D zones get a lot of pressure and success in the Sierras largely depends upon the weather. If it snows, bucks begin their annual migration to the lowlands and that’s when hunters in zones D6, D7 and D8 bag most of their bucks/
California’s pride and joy are the X zones in the northeast part of the state where success rates are as high as 50 percent. Rocky Mountain mule deer are available here, and a few trophy bucks are taken every year in the X5 zones.
We consider a trophy buck in California to have at least a 26-inch spread. Anything over 30 is a trophy  buck in any state! X zones mean limited-entry hunts, so hunters have to apply for their desired zones Don’t forget that early July deadline.
Permits are tough to get here because so many people apply for a limited number of tags. Don’t apply unless you’re in top physical condition because the country is steep and wide open and requires a lot of walking or horseback riding. Don’t expect to see bucks while you‘re driving around in a pickup. Last year biologists said success was lower than normal in the X5 zones because there were quite a few hunters who drew tags who had no business being up there. They were either too out-of-shape or didn’t know the country. Some were  both.  Best hunting in Zone C4 (formerly X5c) is around Eagle Lake, particularly near Antelope Mountain. X5b borders Nevada and the terrain is largely made up of sage brush  with quaking aspen draws Some of the  state’s largest racks are produced here.
gon and California hunting and fishing  maps of hunting clubs, hunting ranches, public and private fishing.

If you like our Fishing map and information on how to fish this lake, we have many more hunting and fishing maps, here is a screen shot, but if you want more info, click on this link:
www.freehuntfishmaps.com

www.ranchhuntandfish.com
California and Oregon for private fishing, hunting clubs, and exclusive network of hunting ranches
we have many more fishing maps and hunting maps at www.freehuntfishmaps.com