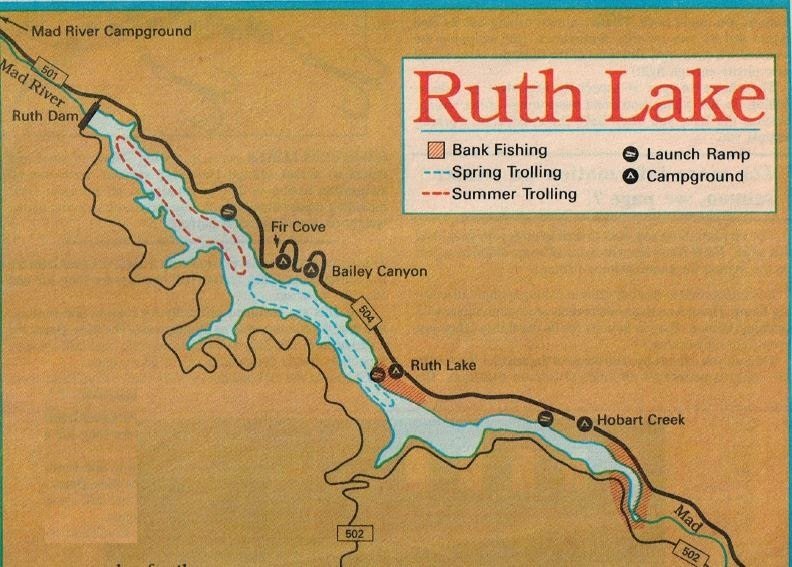 California Hunting Clubs and 2019 Ruth Lake Fishing Map and Fishing Report and How to Fish this Lake!

RUTH LAKE —Winter and spring trout ﬁshing  here is consistent but spring bass ﬁshing  is maybe  the best in northern California… Ruth Lake is an little known gem  and the best ﬁshing in the lake is between November and  April.

According to our fishing report, the bait of choice right now is salmon eggs and  marshmallows ﬁshed in together, and the trout are more  at  areas where there is in ﬂow into the lake, especially at the  south end where the Mad River pours in.
This time of year rainbows are the focus, but kokanee will grow to 19- and- 20 inch ﬁsh caught trolling during the summer and fall.  Trolling is working right on top with all kinds of different lures—Super Dupers, Rooster Tails, Mepps.
There is a lot of natural feed in the lake, so there is no set rule for bait or lures, but meanwhile  these ﬁsh grow girthy and are pink-meated.
Use our fishing map to see where to ﬁsh from both east and west shores on the  extreme south end, and you can drive to right to those spots, at least through the end of  April.
As the water warms and ﬁsh move deeper  the best technique during the summer months  is trolling, and the hotter it gets, the deeper trollers go,  eventually working their way down to the north end and the  dam.
Ruth Lake Marina has gas, bait and tackle Two USFS campgrounds are also available  at the lake.
Bass Fishing is good at Ruth Lake!
According to out fish reports, Ruth Lake has become a really good bass lake, and the bass ﬁshing is  fantastic in March and April when they spawn and  spinnerbaits are a favorite for the mix of large and smallmouth, but  jigs probably take  majority of the ﬁsh overall.
Mister Twisters are good, and Gitz-lts in purple and  gray. Rocky points  and outcrops provide bass shelter and good ﬁshing areas, there is not  a lot of other  structure.
Our fishing report declares the west side of the lake is preferred over  the east side, and  and also the very upper  end,  but south end is also more shallow areas.  Also, don’t neglect the catﬁsh ﬁshery at Ruth either!!

If you like our Fishing map and information on how to fish this lake, we have many more hunting and fishing maps, here is a screen shot, but if you want more info, click on this link:

Also, if you want very specific county by county information on fishing and hunting clubs in California  and Oregon for private fishing, hunting clubs, and exclusive network of hunting ranches found nowhere else, here is a screen shot below, click on this link to go to the site: