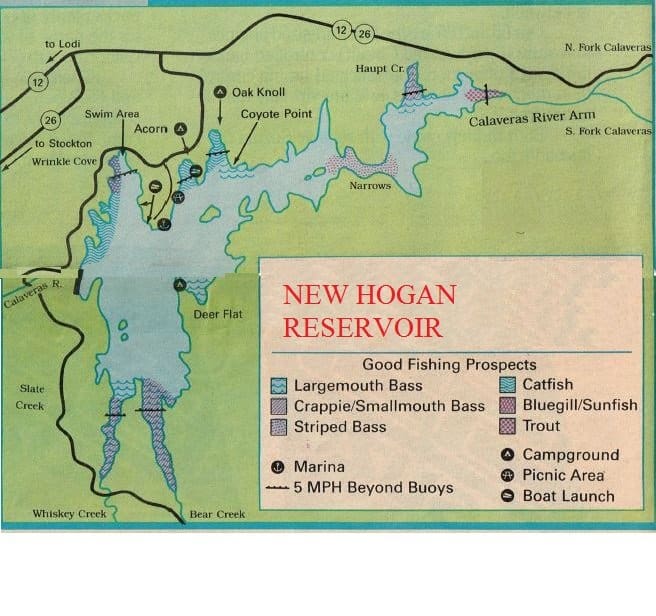 Location: An impoundment of the Calaveras  River, New Hogan Reservoir is formed by a  dam about 30 miles upstream from Stockton. lt’s about seven miles long and has a  number of arms formed by feeder creeks.  The reservoir is one of the lakes nestled in  the foothills of the “Mother Lode” country.
Species: A variety of freshwater fish including  largemouth and smallmouth bass, striped  bass, crappie, catfish, bluegill, and rainbow  and brown trout. The action is good both from boat and from shore.
Facilities: New Hogan Marina offers moorage, gas dock, motor sales and repairs, and a general store including bait, tackle, groceries, camping equipment and  fishing licenses. There are five boat launches at the reservoir, four in the day-use area near the marina and one unimproved concrete ramp in Acorn campground.
Camping is available at Acorn, at Oak Knoll, “primitive” camping and at Deer Flat,  which is accessible only by boat.

There‘s a good reason for New Hogan Reservoir being included in the “Mother  Lode” foothills lakes:
lt’s a wealth of ﬁshing opportunity. The list of freshwater species at the impoundment of  the Calaveras River includes largemouth and smallmouth  bass, striped bass, crappie, catﬁsh, bluegill, and rainbow and  brown trout. And there’s always the chance that a landlocked  salmon or a spotted bass will be landed as well. To learn how to fish New Hogan , read on.
The reservoir stretches for close to seven miles with its sometimes rugged shoreline, its many shallow coves and its small islands. The ﬁrst place boaters will want to head is the  south trees area in the Bear Creek and Whiskey Creek arms.  Where it’s peaceful even with water- skiers out in the lake. There’s some large trees in there and work right in among them.
Check the New Hogan fish map above,  Bear Creek Arm as very good for crappie anglers using Mini-Jigs or small minnows. The action is not as good in the Whiskey Creek Arm because there is less brush  for cover. Another good place to try is in the Haupt Creek Arm in the north end of the lake. ln addition  there are some other crappie holes dotted here and there.
For the most part, the crappie run right around the one- pound mark.  New Hogan once kicked out the state record crappie-  a fat 4 pounds and 1 ounce.  The largemouth bass inhabit the same areas as the crappie. Good cover for crappie is good for bass as well.
There‘s also bass hooked  Wrinkle Cove, but  only go part of the way up because of a swimming area at the  end of the cove, as well as in other parts of the  reservoir. The California Conservation Corps  has dropped brush to improve fish habitat.  ln other areas, the  corps has even planted willows for cover.
Bassers will want to use minnows or black and purple  plastic worms to entice the bass in the spring. As  the water warms up in early summer, anglers should switch to  spinnerbaits and surface plugs.  The same gear will be effective for the smallmouth bass  which can also be pulled from the south trees area and in the  Haupt Creek Arm.
The smallmouths run as  big as 3 pounds at New Hogan.  An occasional spotted bass landed, but any bass from the south trees area have been hit well during the spring and the action  continues to hold until  the warmest days of the summer.
Then the bite will slow, but until then anglers can expect to land  largemouths up to 8 and 10 pounds. On the sunnier days this spring, bass ﬁshermen will also want to try the other many shallow coves and rocky points  around New Hogan. Look at the New Hogan fish map and the shallow coves  near Deer Flats or the rocks near Coyote Point as good spots  to try on the warmer days. Lake records came  Coyote Point area, ar 15 pounds 1 ounce.
Striped bass also bend poles at New Hogan. The largest  striper hooked at the reservoir hit 24 pounds. and the best action  is the narrows  toward the north end of the lake. The narrows are just past a group of islands and the water there is cool and deep.
ln the spring, the stripers will be deep,  but with warmer weather, the ﬁsh will sometimes be  boiling off shad, especially in the early morning and the late  evening.  Two methods are popular with striper anglers. Both the troll and the cast-and-retrieve are effective ways to entice the large bass with minnows or broken-backed Rebels.
Although the state is no longer stocking the reservoir  with trout, anglers can expect to land some average-sized  rainbows and browns from New Hogan. The upper  stretches of the Calaveras River Arm are the trout anglers best  bet.  Both rainbows and German browns are taken there,  and generally run 12 to 13 inches.
Small  minnows or salmon eggs are the best baits to entice the trout.  There’s some good trout action in  the Calaveras River below the dam as well. The river is known to hold a lot of rainbow trout, most people ﬁsh the river with eggs or worms,  but ﬂy ﬁshermen do well too. Brown Mosquito ﬂies size 12 or 14 throughout the spring and summer and they‘re especially productive in the evenings. Have a great time and check out our fishing map site and fishing reports for more information.
Also, if you want very specific county by county information on fishing and hunting clubs in California and Oregon for private fishing, hunting clubs, and exclusive network of hunting ranches found nowhere else,  see table below