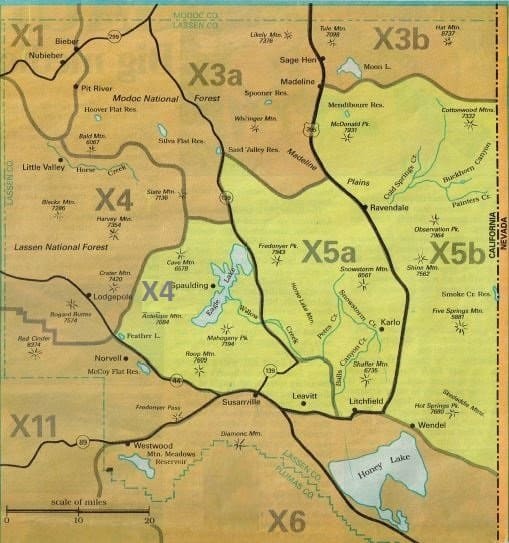 All three of these deer zones are located in Lassen County in northeastern California featuring Rocky Mountain mule deer, 150 to 200 pounds. These  are California’s largest mule  deer subspecies and bucks with  25- to 28 inch racks are not  uncommon.
According to our Hunting Report, the best hunting:  Zone X5b has the  No.1 hunter success!  Zone X5a is second choice, followed by X4 in the South east area as shown in out hunting map.
Check out our hunting map for Lassen County’s X5/X4 zones that  are good deer country but to draw a permit to hunt X5a, X5b or X5c is about  1 in 100. But if you are one of the lucky bums who drew a tag, they’re the closest thing to trophy quality mule deer hunting the state has to offer.
Hunter success hovers around 50 percent. All three zones have some  excellent hunting, and this year’s prospects are as good, if not  better, than last year’s.  A mild winter combined with a fair to good spring fawn  crop are two reasons why hunters should be excited this year.  Most of these deer zones are located on public land owned  by the federal Bureau of Land Management,  most of which is  made up of rolling sagebrush hills and junipers that are  complimented by steep, aspen-rich draws, prime mule deer  country.  Some Hunting Clubs and private hunting ranches are there, so don’t cross any fences.
The wide-open terrain is home of the Rocky Mountain  mule deer, the largest subspecies of mule deer in the state.  Some deer in Zone X’s are mule deer-blacktail crosses, but the deer in Zone X5a and X5b are strictly muleys that average 170 pounds. An exceptional buck can tip the scales at 200 pounds and those kinds of deer come out of X5a and X5b every fall.
These deer grow some pretty nice antlers a 3-year-old average buck sports a 20- to 22-inch rack, but good bucks in the 25- to 27-inch class are common. Trophy bucks in the 28- to 32-inch class are shot every year in all these zones.
Zone X5b  It’s the best. The season opens early October every year but o hunters have good two weeks to ﬁnd their buck, before it closes, and the buck which must be a fork 4 better. Zone X5b is a large, open area that has excellent access that‘s largely BLM land.
Observation Peak or Shinn Mountain opening day is crowded but chances are, they’ll shoot some nice bucks. But try Cottonwood Mountains up north for less crowds, and it holds some trophies. Another good choice is McDonald Peak or head to the Skedaddle Mountains. Check our Hunting map for more information.
Zone X5a This is the second best zone out of the three as far as hunting success goes. Count on seeing plenty of bucks in the eastern Lassen County zone, located west of Highway 395. Top areas at Fredonyer Peak, Snowstorm Mountain and Shaffer Mountain
Zone X4 .  X4 is lowest of the Big Three, an  deer are largely scattered in Lassen National Forest, down by Eagle Lake.  Best place to ﬁnd those huge bucks are Antelope Mountain on the fringe of the forest. Other spots worth a try Mahogany Peak and Roop Mountain.
Oregon and California hunting and fishing  maps of hunting clubs, hunting ranches, public and private fishing.

If you like our Fishing map and information on how to fish this lake, we have many more hunting and fishing maps, here is a screen shot, but if you want more info, click on this link:
www.freehuntfishmaps.com

www.ranchhuntandfish.com
California and Oregon for private fishing, hunting clubs, and exclusive network of hunting ranches
we have many more fishing maps and hunting maps at www.freehuntfishmaps.com

Get on our mailing list for Newsletter and to receive New Fishing and Hunting Maps and Hot Spot News in your area If you want FREE info on Hunting access and Fishing on over 200 Private Ranches and Hunting clubs, fill this out ! (We NEVER release your info to anyone not specific to this inquiry!)