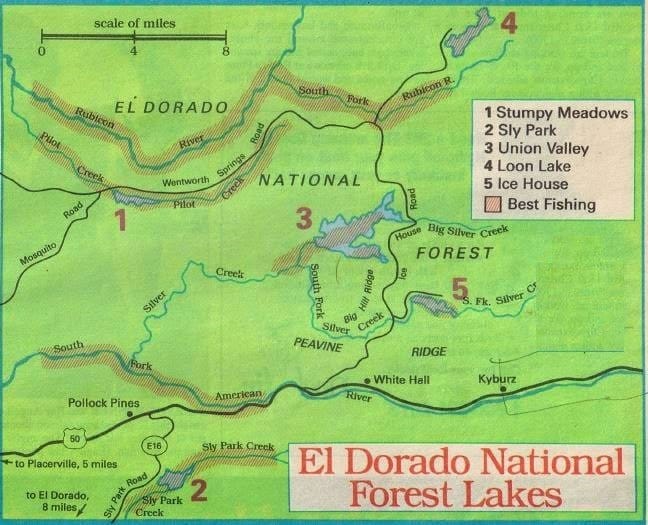 Loon Lake, highest lake in this area referenced here
Click on a county for Public Lands, Hunting Clubs & Private Ranches:
As shown in our fishing map, these ﬁve lakes are all located in El Dorado County in the  national forest. Their names Stumpy Meadows, Sly Park,  Union Valley, Loon Lake and Ice house Reservoirs.
BIG GERMAN BROWN trout are in El Dorado National Forest lakes.
According to our fishing reports,  Stumpy Meadows, Ice House and  Union Valley all have good populations of browns, including  some rod-benders in the 10- to 12-pound weight class! Trolling Rapalas is the best way to catch the browns, while rainbows will hit Kastmasters, Needleﬁsh, Super Dupers and  flasher-nightcrawler combinations.
Northern California anglers are facing a drought this summer. Lakes and reservoirs are  already way below capacity and they’re getting lower  every day because of irrigation.  Most  lakes, reservoirs and streams by July will be extremely low and clear,  and fishing will be downright tough at most waters,  especially reservoirs.
So it follows that now is the time time to enjoy  the best trout ﬁshing, and that’s  why we’ve chosen five lakes on our fishing map that produce during May and June.  All have browns, rainbows and Mackinaw and kokanee in  two of the lakes.  But this summer will be hot and dry and these  low lakes will become even lower, and maybe even inaccessible to boaters.
Stumpy Meadows
This reservoir got its name from the left over flooded stumps and offers some pretty good  brown and rainbow trout ﬁshing. There is a 10 horsepower motor limit, good enough for  its  315 acres.
In May and June, trolling with small plugs or ﬂashers  and worms around 10 and 15 feet deep for larger browns,  up to l0 pounds and more! Rapalas are great brown  trout lures too. Needleﬁsh or Kastmasters produce more, but less sizeable, rainbow trout. According to our fishing report, as the water warms, look for the submerged  stream channel and deeper spots near the dam hold ﬁsh
Bank ﬁshermen toss air-injected worms salmon egg and mini marshmallow combinations — deep near the dam, off the bank by the campground or at  the inlet creek. Fishing is good until surface temperatures top  70 degrees when deeper trolling or bait ﬁshing from boats  improves results.  Lures also work
Casting with a  1/2-ounce  gold Kastmasters or Hopkins spoons will catch ﬁsh. Do “fan-casting”: alternately cast along the bank, then out into the lake to cover a  wide area. After the ﬁrst fan with immediate retrieves, start  your second  fan a bit further rom shore and countdown ﬁve  seconds so the lure drops, and cover  the fan once more. Repeat this with 10-, 15- and 20-second  drops until you locate ﬁsh or hit bottom.
Fly ﬁshermen wait until dusk ﬁshing off the bank, is fair, but according to our fishing map, you really need a ﬂoat tube, skiff  or canoe to get across the lake to the better ﬁshing on the  south side. Sierra pattems work best. No. 14 Adams, No. 10  Joe’s Hopper, No. 18 Black Ant and a No. 14 grey hackle with  a yellow body all take ﬁsh.
After July, these ﬂies ﬁshed  behind bubbles produce more trout on the average in the  evening than lures. Wet ﬂy patterns such as No. 12 Zug Bugs,  No. 10 Black Woolly Wonns or No. 14 Rio Grande Kings take  rainbows, while the browns hit No. 8 or even No. 6 Little Brown Trout and other  streamers spring and fall.
Union Valley
May 1st 2016 Update Lake is almost full, watch out for lots of log hazards floating around.
The fall is an outstanding time to ﬁsh  Union Valley, as well as the other lakes  we’ve mentioned.  Anglers will ﬁnd a variety of ﬁsh  including planter rainbow trout, some  big brown trout and kokanee.  Brown trout up to 12 pounds if you who pull Rapalas  in 25 feet of water or  less. A
Fly casters will catch some nice browns  in the fall with streamers, Woolly  Worms and Woolly Buggers from the  bank and ﬂoat tubes.  Planter rainbows, including some nice holdovers to  18 inches, are available. Dunk baits or  drag lures on the top 15 feet early in the  morning and from 5 p.m. until dark for  best results.
Kokanee like the cool, deep water  and you’ve got to troll the standard  ﬂasher-Wedding Ring combos if you  want to score. Use half a nightcrawler or  white or yellow corn kernel for an  added attractor
Loon Lake
This is the a smaller lake of top ﬁve  choices, and at the  highest elevation at 6,410 feet. Good rainbow trout populations in both the lake  and in the South Fork Rubicon River.  The lake is small  so you can fish the bank, but  anglers who use ﬂoat tubes, canoes, etc. will have the advantage.
Ice House Reservoir
Anglers will find planter rainbow  trout, kokanee and some big browns at  this reservoir. Ice  House is low and clear, but ﬁshing success is good right now according to our fishing reports.