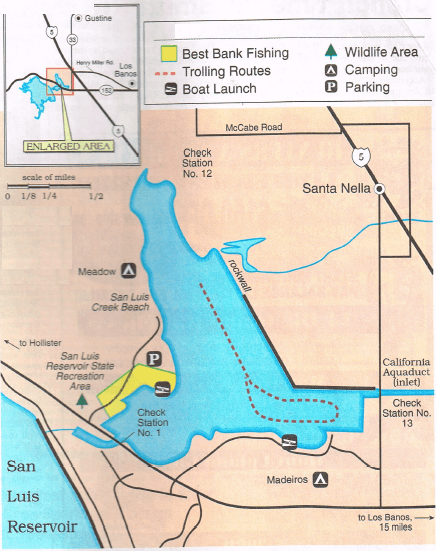 For Fish info on nearby San Luis Lake click here
O’Neill Forebay stripers: Stripers are huge at this fishery, no other chunk of water in the state matches O’Neill for the size of its landlocked stripers 40 to 60 pounds, and this is a place where anglers can hook  them from a boat or from the bank.
Most go between 3 and 8 pounds, and striped bass at 15 to 20 pounds are common. While fish even heavier are  harder to come by, they are there and show once in a while. Several line class records are held by the lake,  but the real attraction is the possibility for boat less anglers  to lip one of the really big boys.
WEED CITY: They’re a blessing  and a curse. At times you would swear  ONeil is half water and, it seems,  half weed  growth. Hydrilla, water hyacinth, whatever you choose to call it, the green stuff  will foul your prop and grab your tackle even when you’re extremely careful.  On the upside, the nourishing crop of  water plant is the perfect cover for bait-fish, and we have it to thank for the size  of ONeill’s bass. The aquatic trails provide  easy routes for the big fish to follow, and pockets where paths merge are  prime territory for live bait.
Looking at the surface  of the diminutive lake reveals holes in  the weed growth. These are spots to target with live minnows. You’ll have to  hack your way in with your prop; be  prepared to spend time removing  bushels of salad from your drive unit. But once near the pocket, you’ll be glad you  made the effort.
Rig a live jumbo minnow under a bobber and toss it into the hole. The free  swimming bait has an appeal like no  other, and it may be the best way to attack the potential trophy linesider.  Minnows will be effective almost anywhere along the submerged highway, 22  but the small clearings  are the only places  you can actually work  the bait.
The real problem  comes when you do hook up and the fish O’Neill Forebay is known for big striped bass that thrashes through its jungle, heaping piles of leafy green on  your line.
TROLLING: Another good tactic for  O’Neill stripers, trolling is what you can  do in places where all the weeds won’t  be too much of a problem. When you start dragging gear, remember that the  big guys you’re after prefer a meal to a  snack. Foot-long plugs aren’t too large pick out  super-sized Rapalas,
Rebels and MaunsSuper Stretch divers. Cordell Spots with  the rattle are a good choice too.  The most commonly  used at O’Neil are blue and chrome,  chrome with a black back, and red and  white.
Get a little more depth when you  need it by running a spreader inline with  a 1- to 2-ounce Hairaiser jig on a drop  line.
JIGS: Two ounces should sufice, and if  you add a live minnow on a trailer hook  you’ve got a killer rig. Use bait scent if  you don’t have minnows. Yo-yo  Hairaisers, Horizon Pirk Minnows or a  Gibbs Minno.
BAIT:  bait bags more fish at  O’Neil than anything else, but also most people use it than anything  else, so it does most of the catching.  Cutbaits will entice the stripers into a  bite whether you toss out chunked  anchovy, shad parts but a live minnow is no doubt the most attractive of offerings that  are
alive and kicking.  When rigging to soak bait, go with a sliding sinker setup.
Use a Slido stopped  by a swivel and about 3 feet  of leader. Depending on where you fish the lake, you may need to make long  casts. A surf rod makes a  good launching platform.
At O’Neil, night anglers  like to hang a bell on the rod  tip for an audible signal that  a strike has occurred. Other  more vigilant fishermen and  women use a small light on  the rod tip for a visual indication that a fish is considering the bait.
HOT SPOTS: As on any  given body of water, some  spots just seem to produce  more fish than others. Often  these are places that are just  easier to fish; better holes  may exist but few are willing to expend the extra energy to work them over. The  wise striper chaser will try  the known and scout around  as well, hoping to find that  secret honey pot.
Of the well-known locations, you may want to try  Check l and Check 13,  especially the deep channel.  The brickwall is a good zone  for trollers and jiggers. The  inlet to the Delta Mendota  Canal is a decent place to  toss bait.  Another nice thing about  the inlet to the canal is the  ability to fish from your  vehicle. It‘s kinda handy  when plunking at night to sit  in the warmth of the truck  watching your rod and waiting for that hammer-blow  strike.
Quick Facts:
Where: O’Neil Forebay is located in the foothills of the Diablo Mountain Range just  west of Los Banos, near the intersection of I-5 and Highway 152.
Size: It’s a teeny little thing when compared to the size of its fish — only 2000 surface  acres with 14 miles of shoreline at an elevation of 540 feet.
Target fish: Striped bass, black bass, catfish and panfish.
Facilities: O’Neil has a boat launch ramp, camping, picnicking, hiking and biking trails.  Other services including tackle shops are located nearby in the towns of Santa Nella and Los Banos.
Quagga boat inspections are in effect, as well as having compliant engines under the new rules this year.
Call: San Luis Reservoir and O’Neill Forebay Wind Conditions: 1 (800) 805-4805.