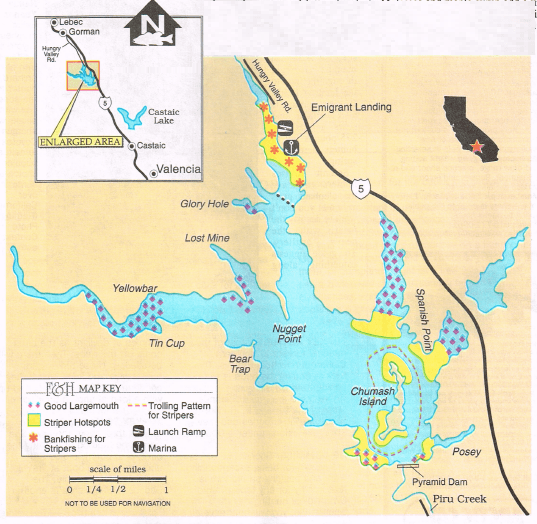 2019 Pyramid Lake Fishing Map and Report, How to fish this lake,Hunting Clubs, and Public Lands

You won’t have to drive too  far from the big city to put  the hurt on some quality ﬁsh. Pyramid Lake is just a hop, skip and a jump out of  town, and has multiple species of  gameﬁsh ready to bend rods.

Not to be confused with that other ﬁshery over in Nevada, this Pyramid is  right smack-dab between Bakersﬁeld  and Los Angeles on I-5. This lake is  where Southlanders can do that bassin’  thing for smallies and largemouth bass,  chase trout til they’re blue in the face,  pick off a catﬁsh or hang one of the big  critters lurking in the depths — a striped  bass.

A BUNCH OF PHONIES: Check out  Pyramid Lake on a weekend, and you‘ll  ﬁnd a bunch of phonies working the  lake. Not the anglers mind you, but the  lures tossed at the smallmouth and large-  mouth bass. It’s the hard-core bass-types  on the trail of their favorite ﬁsh, ﬂogging  the waters with man-made products that  emulate or grossly exaggerate the features and qualities of natural forage.

Respectable ﬁsh will chow down on  the artiﬁcials with the smallmouth hit-  ting 3 to 5 pounds fairly regularly, large    Gun and run for striped bass at Lake Pyramid *  mouth nmning from 3 to  7 pounds for good catch-  es. Lunkers of the large-  mouth persuasion over  12 pounds have been  weighed-in. Bait ﬁshers  will hammer a few of the  bass too, but to score big, plan on faking it.

SEEING RED: “With  March, bass anglers are  seeing red at Pyramid  Lake. Plastics, spinners,  and cranks in crimson  hues are faking out the  bucketmouths and the  smallies. Normally red  patterns are associated  with crrwdads, but with  decent trout plants at this  lake, die bass may see  the offering as small  rainbows. Its actually  combinatitms of red with  black, brown. and yellow  that are taking the lake  by storm right now, but  conditions can change in  the blink of an eye. Be  sure to bring an arsenal  _  of lures and colors to  cover all the bases.  Expect the bass to be in  the shallows at Pyramid,  and into pre-spawn mode

PYRAMID LAKE IS PLANTED with decent rainbows, and  the better ones are about the size of this four pounder.  From shore, youll ﬁnd the best bow ﬁshing near Emi-  grant  this month. lt’ll be easy  to make the ﬁsh mad and generate  aggressive strikes. Go with topwater early in the morning, a shallow running  crank once the stm is good and up, then  rig for plastic grubs and worn-is as the  sun moves higher in the sky.

BIG WHITE BUOYS: Since they’re in  the water, landmark may not be the  proper term, but consider the big white  buoys in the middle of the lake beacons  to one of the better striped bass locations  on the lake. According to the Pyramid  Bait Shop (661-257-2892), the bouys,  the dam and the deep water channels are  the top contenders on the linesider hon-  ey-hole list.  Snipers from Pyramid aren’t going to  threaten any state records for the ﬁsh,  but ﬁve-pounders are the norm here, and  they ﬁght like freshwater tuna. Bass in  husky sizes patrol the lake too. Eight- to  12-pounders show every year, and  maybe you’ll be the one to whip the lake  record and top 18 pounds.  The big bass aren’t letting their pres-  ence be felt much lately. But with nicer  weather on the upcoming agenda, these  guys will shake off Winter’s lethargy  and leap to the forefront of the ﬁshing  scene. Expect to see this powerful ﬁsh  boiling schools of trout at the surface,  and plan on taking advantage of the sit-  uation.

RUN 8: GUN: Ambushing the stripers  during a boil isn’t really possible, but  stealing the game plan from the U.S.  Amiy’s Rapid Deployment Force and putting it to use on the water is. When  the bass kickoff their boil season, they  don’t spend more than a couple of min-  utes frothing the water while they slash  at the surrounded trout. Your time is lim-  ited. You must get to the objective  quickly, and launch your attack immediately.  A sound strategy includes having your  gear ready, motor running, and eyes  open for erupting water. On the of spying the ﬁrst sign of a boil, slap the  throttles down, run to within SO feet or  so, and ﬁre topwater lures into the fra-  cas. Rip Excel Specials, Zara Spooks  and such with energy, and stand by for  hammer-blow strikes.

BRIBERY: When gun & run tactics fail  to give you satisfaction, bribe the  stripers with bait. At Pyramid, most of  these ﬁsh fall victim to an artfully pre-pared anchovy, but sardines, mackerel,  and the trusty nightcrawler will also  work. Sweeten the pot for the big ﬁsh by  adding bait scents for more powerful  attracting smells.

SUCKER PUNCH: The catﬁsh take baits too, but add clams and poultry livers to  your on-board or shoreline pantry. 10-,12- and even 15-pound ﬁsh can ﬁll up a  ﬁsh-box pretty quickly. Look to the  coves and bays for good action. Should you ﬁnd a delineation between muddy and clear water near a creek inlet, drop  your gear just outside the murk. Catﬁsh  will hang in locales like this, and pounce  on forage appearing from the cloudy  water.

MORE THAN A MEAL: You might  catch a pan-sized trout at Pyramid Lake,  but it’s likely you’ll hook-up with rain-  bows between 1 and 3 pounds. Trout at  this lake are more than a meal, with a  stocking program that doesn’t include  small fry. At the same time, a ﬁsh  with a double—digit weight from  here deserves red-letter head-  lines, but a four-pounder is a pos-  sibility.  Anglers on the bank haul more trout than anyone else at Pyramid,  and as expected, Power Bait plays the  starring role. Best supporting role goes  to God‘s all-purpose bait, the  nightcrawler, but trouters may need to  think about alternatives for when the ﬁsh  decide they need a break from the steady  diet of putty and worms presented to  them day after day.

A NOVEL APPROACH can put trout  on the stringer when the bite is slow, try  concoctions of your own manufacture,  or go with some time-proven but almost  forgotten baits. The Sierra Sundae — a  salmon egg and marshmallow — isn’t  seen too often these days, and the old  cheese-and-tuna-ball combo has almost faded from memory. Modiﬁcations to  popular baits will help on a slow day.  Molasses and maple syrup add a unique  ﬂare, and a garlic sauce on the bait will not only entice the trout, but will keep  the vampires at bay as well.

AT A GIANCE  Location: Pyramid Lake is located  right off I-5 three miles south of  the town of Gorman, in the Los  Angeles National Forest.  Size: The lake has 1,297 surface  acres and 21 miles of shoreline.  Pyramid sits at 2,606 feet in  elevation.  Species: Rainbow trout, channel  catﬁsh, panﬁsh, largemouth and  striped bass.  Facilities: Located at or near the  lake are campsites for tents and  RV’s on a ﬁrst-come, ﬁrst-served  basis. There are also group camping sites for up to 30 people  by reservation. The lake has a  launch ramp, full service marina  with docks, gas, and boat rentals,  swimming beaches, picnicking,  boat-in picnic sites, snack bar and  tackle store, and a designated off-  road vehicle area.  Contact: Pyramid Lake Bait Shop  (661) 257-2892.

Click on a county for a listing of public land and contact info for Hunting Clubs/Ranches, and many more Maps! :

California and Oregon Private and Public Hunting and Fishing Information:

Information on Hunting and Fishing Clubs and Ranches in California and Oregon:

If you want a more specific, county by county description of Oregon and California Hunting Clubs, Ranches and public areas to hunt and fish, you need to see: