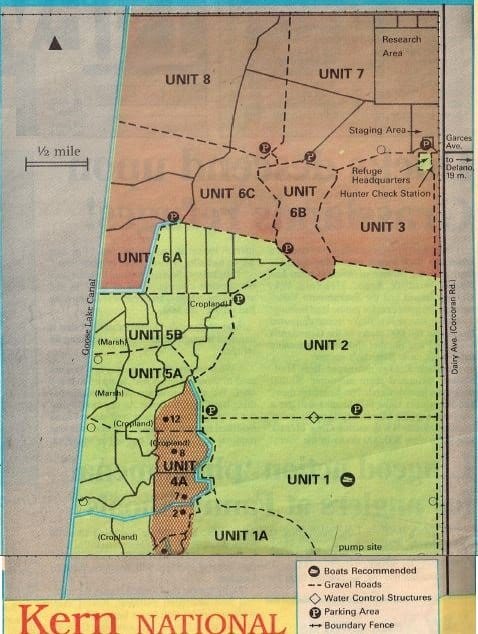 -How to Hunt Kern and Best areas

LOST HILLS — There’s lots  of golden opportunity for ducks in the  Golden State, and one place that almost  always produces good results for duck  hunters is Kem Refuge NWR. ln fact, hunters  average more birds in the bag here than  on any other public refuge in the state!  Last year, the hunters who showed  up on opening day averaged 4.2 ducks  per gun, out of a possible 7.0. We don‘t  know what happened to the other .8  percent of the duck, but not bad shooting for public land!
Apparently, the only guys who didn’t  get their limits were those too stiff from  sitting in line to point a shotgun properly.  The key to whether or not there are ducks at Kern at any time during the  season is whether or not there is a  steady water supply.  In years past, , the refuge didn’t  open until midseason, due to a lack of  available water. Fish and Wildlife Service personnel at Kern refuge have to  scramble every summer to make sure  there will be water in the fall.
Kern limits the  number of hunters to the number of  ﬂooded acres, and since water just  started arriving , there isn’t  much in the way of water — yet.  But just you wait. Last year, about  20,000 ducks showed up by the latter  part of the season, and  there are a  lot of ducks already on the surrounding  area.  Once they get wind of the freshly- ﬁooded ﬁelds over at Kern, they’ll be on  their way. Stay tuned to receive our Refuge Hunting REPORT
At least for the ﬁrst part of the season, it’s a good idea to have a reservation to ensure yourself a spot on the  refuge. Unlike some other overcrowded  public refuges, Kern only allows one  hunter per 20 acres, so that means relatively low competition and not as many  problems with neighbors skybusting  next to your blind.  The ﬁrst area to be  ﬂooded this season will be Unit 1, the free-roam area.
In the  spaced- blind area last year  there were two or  spaced  blinds that had  real good hunting.  Hunters who work the area do  best with a ﬂat- bottom boat.  There are lots of  standing cattails  and other marsh  cover and food  grasses to provide  incoming ducks.  Last year some hunters were com-  plaining the brush was too thick. This  year there have been some control burns  in Unit 1 to create pathways for ducks  and hunters. Some of the spaced  blinds are likely to be ﬂooded by opening day too.
Refer to our Refuge Hunting Map, and you will see that the northern blinds  are the most productive, although if you  get a spot in blinds 2, 7, 8 or 12, you  should be sitting pretty.  Wire structures  provide a ready frame for your own  brush. You can collect it on the way in  from the parking lot or bring your own.  If you hunt later in the season, blinds  will have been used several times, and if  the cover’s good, you may want to leave  it alone. Ducks that have been on the  refuge for several days will be used to  how the blinds look, and might be more  wary of changes than anything else.  Success is pretty high here, and  sawy hunters usually limit out. Stay tuned to receive our Refuge Hunting REPORT.
What  are their secrets? Be patient and let the ducks work the  decoys..  Don’t unload your shotgun at the  ﬁrst sign of movement. Make sure the  ducks are in over your decoys and that  you can pull ’em down.  You can get away with as few as eight  if you follow basics like setting up with  the wind at your back and creating a  landing pocket by placing decoys in a  “J” or hook pattern.
Don’t be afraid to shift your decoys if the wind changes.  Most ducks will land directly into the  wind.  How many decoys you use will also  depend on which part of the refuge you  hunt from. In the spaced-blind area, you  can opt or smaller decoy sets. In the  free-roam area, it may take a bigger  spread to pull birds in from competing  sets. A more subtle small  pond approach to decoy sets is usually  most effective here.  The wettest parts of the  refuge usually hold the  most mallards, and  you’ll ﬁnd the teal and  shoveler just about  everywhere.  Refer to our Refuge Hunting Map for more details.
Kern Refuge gets a mix of teal, shoveler,  pintail and mallard. Most hunters here are out for pintail, and if you want to target sprig, head  for the central-to-west portion of Unit 1 ..Refer to our Refuge Hunting Map The wettest parts of the refuge usually hold the most mallards, and you’lI  ﬁnd the teal and shoveler just about  everywhere.  Best times to hunt Kern are opening  week and from the first week of  December through the end of the season. The build-up of birds toward the  season close can be phenomenal…  sometimes as many as 70,000 birds are  counted on the refuge and in the surrounding valley. ‘  Late-season hunting is also better  because the guys still out in the ﬁeld  mean business and aren’t likely to cause  problems for fellow hunters.  Stay tuned to receive our Refuge Hunting REPORT
California duck hunting clubs, hunting ranches, public and even private fishing

Hunting private lands in California has several advantages over the public areas. Chief among these are much less hunting pressure, better forage and water supplies and easier vehicle access.
We use a hunting map site that has over 200 private ranches, with or without guides Over 45 Duck hunting clubs you can use
Click on a county for Hunting Clubs & Private Ranches:
It’s free, and get you access to our free map site too. Here is a copy of the home page:
www.ranchhuntfish.com