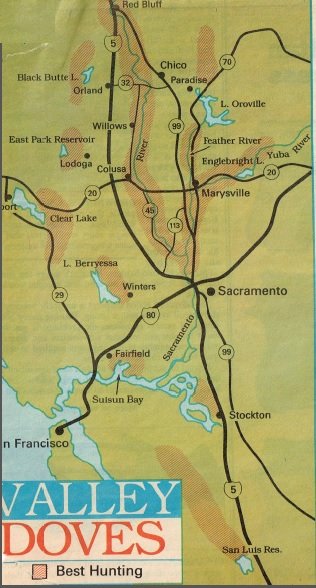 How to succeed at dove hunting!  Use our hunting map to find some general location, then find water and grainﬁelds and add a generous dose of scouting! As usual, this  year‘s dove season starts Sept. l  ends Sept. l5. Then there’s a two  month closure before the second years season  opens Nov. 12 and runs Dec. ll. .

Scouting is the key to success!  Try and combine  dove, quail, pheasant   while bass pond scouting in the foothills  of California or join up with our network of hunting ranches and hunting clubs, most of which have good to great dove hunting.

Look for dove habitat,  grain ﬁelds like millet, corn, safflower and sunﬂower.  Permission  is, of course, easier to get during  off-season too.  Sandbars on the Feather and Sacramento rivers collect doves early and late in the day. Boat access dove hunting  hunters away from most pressure. It  you hunt along waterways that have doves in great numbers. And it lets you harvest doves that ﬂy to  from otherwise posted land!

Water is another key to success,  especially in the northeast part of the  state,  in  Lassen and Modoc counties, because water is limited up  there.” He said water is not as important in the Central Valley because there  are a lot more rivers, aqueducts and  reservoirs. Therefore, doves won’t be as  concentrated as they will in other  drought-riddled regions.

So where you ﬁnd doves, you’ll ﬁnd  water nearby, and in the Sacramento  Valley, there are some key spots along  the Feather River. The Orovillc Wildlife  Area to Gridley Bridge, the Bridge to  Live Oak, Live Oak to Shanghai Bend,  Shanghai Bend to Boyd’s Pump and  Boyd’s Pump to Verona drifts all produce birds if you gel out early.
Sacramento River doves from Red  Bluff downstream are available early or  late — easy levee road access in many  areas means you can shoot in the evening. Then haul your boat up the bank  instead of making a long run to a ramp  after dark.
In the Delta, birds around  Sherman Island and Georgiana Slough,and  Bay Area residents might look in for  access behind Castro Valley, towards  Briones Valley, and, with considerable  effort, in the Sobrante Ridge area. All  of the spots near urban areas are, of  course, crowded and permission to hunt  may be difﬁcult! So check at the county  courthouse and regional Fish and Game  ofﬁces and you can ﬁnd smaller public  areas that permit hunting.
If you haven’t scouted, and want to  hunt the Central Valley, try levee roads  along valley rivers at the ﬁrst and last  two hours of the day. These areas will  crowd, but there are usually enough  birds for a Saturday and Sunday shoot.  If you want to hunt more days, pay close  attention to the feeder creeks, sloughs  and ditches that run into the Sacramento, Feather or San Joaquin rivers.  Check all direct access roads that leave  levee access, and get out of the car to  look for last year’s shells. Tip: always  pick up your empty shells, no point in  tipping off a good spot!  Spots inside bypasses and on ﬂood  plains inside the main levees can be

The second season   Nov. 12-Dec. ll, when most people are hunting ducks in  rain, sleet and snow! The only doves you’ll see in the North  State are ones from Washington and Oregon that are migrating south, and 90 percent of them will already be in Southern California’s Imperial Valley or in Mexico where limits are  liberal.  Why the split season? To give doves in Washington and  Oregon a chance to migrate south without giving hunters a  shot at them.
The northern birds migrate the middle  of September and are usually down south by mid—November.  Doves pack their bags and head to warmer weather at the ﬁrst  rain or cold snap. Game managers in Oregon and Washington  don’t want Californians shooting their birds, so to speak, so  we must suffer through the closure.  N
Nonetheless, there are still plenty of California birds to  shoot.

Hunting private lands in California has several advantages over the public areas. Chief among these are much less hunting pressure, better forage and water supplies and easier vehicle access. It’s a fact of life, and hunting on private ranches is almost a sure thing.

We use a hunting map site that has over 200 private ranches, with or without guides www.ranchhuntfish.com

It’s free, and get you access to our free map site too. Here is a copy of the home page:

Subscribe to our HotSpot newsletter, get weekly reports and new maps!