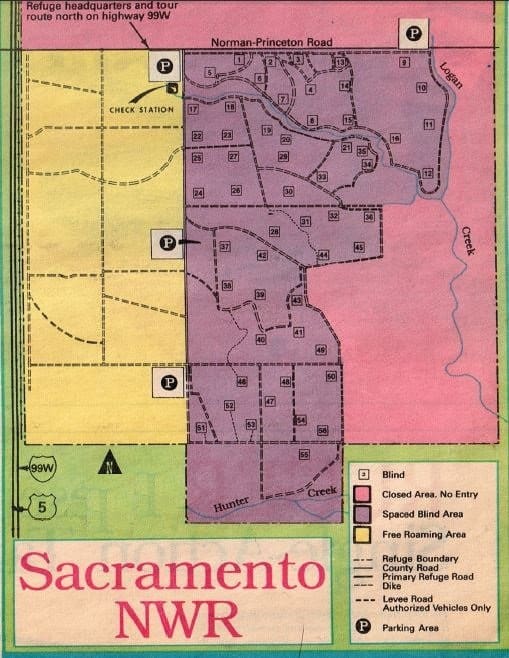 – Refuge report and how to hunt Sacramento refuge

— The best duck hunting tends to be on private land. Usually. Most of  the time. We have access to 40 different properties you can duck and pheasant hunt, see below for more info.
But if you don’t have a huge budget for paid  duck hunts and are bound and determined to hunt  no matter what, then the refuge system is a darn  good bet. And Sacramento Refuge is a good choice.  There will be some good shooting on the opener  on a good population of local ducks, but northern  birds are already trickling in. What happens from  here on out will depend entirely on the weather to  the north.        Last year, there was some miserable hunting  because of picnic~style weather during the middle  of the season. Then storms hit the north and those  birds ﬂowed into California, providing some dynamite shooting. Stay tuned to our refuge hunting reports as the season progresses.
That could happen again, or we  could get a steady ﬂow, which isn’t had but isn’t  fantastic, either.  However it goes, Sacramento Refuge is a good  place to be.  Of course, lots of people have discovered that,  and the powers that be have decided that allowing  everybody to hunt is in no one’s interest. That  equals rules, drawings and hoops to jump  through!
The Sacramento Valley refuge personnel have been busy beavers this  year, improving habitat and planting rice and natural foods to attract and hold ducks on the refuge  and keep them off the pocketbooks of the valley  farmers  There are 500 to 600 acres of rice on the refuge  which gets pretty well hammered by the ducks,  since they prefer rice to their natural menu. They  turn to the millet and smart weed after the rice is  gone. They hammer the rice, but they never exhaust  the natural feed.
That adds up to more ducks for hunters.  If a place has suitable habitat and attractive feed  for ducks but is shot up daily, the ducks still won’t  stay. But Sacramento as well as the other area  refuges allow hunting on only three days per week.  Hunting is allowed on Wednesdays, Saturdays  and Sundays. That gives the ducks four days to  calm down and get back to their duck doings. . .or  goose doings, since Sacramento is also a top  goose-gunning spot.  The best hunting is on Wednesdays and Satur days, because the birds have had two days to calm  down. By Sunday they are pretty wary.  You can get on the refuge in one of two ways. Get drawn by the DFG‘s computer, or you can wait  in the “sweat lines” in the refuge parking lots. You have to buy a hunting permit either way purchased from  your local store that has a set up for this.
The Nationa (federal) refuges are managed by the  state on this system.  At Sacramento, where there are blinds already  established, a successful entrant may bring one  other adult hunter and each may bring two junior  hunters. So coordinate things with your duck hunting partner; between you, you have a pretty good  chance.
If drawn by the state computer you will be  notiﬁed within seven days of your hunt date.  If you wait in the no-show lines, you are taken  on a ﬁrst-come ﬁrst-served basis. Your  odds of getting in this way are poor the  first weekend. Then they get pretty  good, until the northern birds start coming in in big numbers as they did last  year in the last week of the season.  What happens is that hunters show up  in vans or campers and wait in the vehicle line as much as two days in advance  of their hunt. That’s right! Two days  sleeping in a car! But in the middle of  the season, you can get in on a Wednesday by showing up at 3 a.m. or so. . .usually.  Stay tuned to our refuge hunting reports as the season progresses.
The way the refuge is set up is mostly with  standing water in pools with blinds spaced out over  the pool area to give plenty of elbow room. That  avoids sky-busting and too much competition  between hunters. There are two types of blinds,  pits and boxes.See our refuge Hunting maps.  The pits are on islands and banks  and the box blinds are either built on islands or on  stilts.  There is also a smaller part of the refuge set  aside for free-roaming. There’s some good goose  hunting here, but there are no blinds. Hunters  usually fashion little mounds out of loose tules and  lay in the middle of them.
lt’s a good idea to have a big spread. During the  hunting season, ducks get very wary. That presents no particular problem on the  refuge, but you need to keep the number down to a  day-trip level, so you are not spending all your time  carrying dekes. The ﬁeld hunters using shells may  have a slight advantage here.  The goose populations are looking very good  opposed to the duck populations, said Collins.  The low sprig numbers  will be made up a little bit with a very  good population of local mallards.  Being in a well-populated area, there  are plenty of places to stay within a  couple of minutes of the refuge. Stay tuned to our refuge hunting reports as the season progresses.

Boar hunting private lands in California has several advantages over the public areas. Chief among these are much less hunting pressure, better forage and water supplies and easier vehicle access. It’s a fact of life, and if you’ve never got your boar, hunting on private ranches is almost a sure thing.
We use a hunting map site that has over 200 private ranches, with or without guides www.ranchhuntfish.com
Click on a county for Hunting Clubs & Private Ranches:
It’s free, and get you access to our free map site too. Here is a copy of the home page: