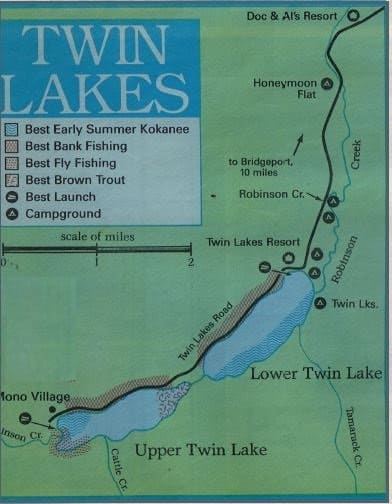 we have many more fishing maps and hunting maps at www.freehuntfishmaps.com

Twin Lakes California Trout Fishing  Area can be found near Bridgeport, California. The majority of ﬁshermen at Twin Lakes are looking for consistent ﬁshing for rainbows and kokes, but, Lord, there are some huge Brown trout in this lake as well!
A couple of California State Records in the plus 25 pound class are from the Twin Lakes, and locals say there are 40 pounders in there.
Lower Twin Lake is located 10 miles southwest of Bridgeport on  the Twin Lakes Road. Upper Twin is 12 miles southwest of Bridgeport.   Lower Twin is 275 acres when full, and Upper Twin is about 265, but  both lakes are anticipated to be low this season.
There are tons of kokanee in both lakes, you can  almost always go out and limit on the kokanee.  Both lakes are loaded until early fall, when kokanee tum bright red and  head up tributaries to spawn.  The kokanee in Twin are usually 8- to 12 inchers, but up to 18-inchers come in. Kokanee can be caught with colored lead- line set-ups, but you don’t really need deep trolling gear here.
You can drift-troll for the kokanee and on the troll is a  rubber snubber or kokanee rig, which is tied  between the main line and the leader, that absorb the  shock of the fish strike. Kokanee mouths easily rip out when a  ﬁsh hits
Use a spinner  on the end, with an  18-inch leader.  Our fishing report suggests you drift out along the south shore, toward the east end of the lake. Kokanee are schooling ﬁsh, and  they might be in a different place this week from  last. Main baits for kokanee are mini-nightcrawlers  or garden worms, ﬁshed alone on a bait hook or  spinner.
Some also use Red Magic lures  for trollers.  In Spring time you can catch them in 5 to 30 feet off the surface.
Kokes  are hard to catch from the shore, but bank anglers are  taking limits of trout on the north bank of the upper  lake, right near the road. On shore, Rainbows are after  worms, eggs and marshmallows and use  a  light leader, the ticket to full limits.
Brown Trout Monsters Lurk Beneath !
HUGE browns!  Big trout are in Twin Lakes check our Fishing Map to find the Lunker Brown Trout. There has been two  state records out of the Twins, but the you’ll have to spend time in search  of a legendary Twin Lakes brown.
According to our Fishing Report, you will need deep-trolling  leadcore line, and  No. 13 ﬂoating Rapala. These lures have better action than the ones that sink.
If have mono on your reel, use one of the countdown types.  Most big browns are caught in the top 25 feet of water. In spring, browns will be in shallow areas.  Summer you should ﬁsh near the juncture of the two  lakes.  In late summer, however, browns will be concentrated at the mouths of spawning tributaries. See our fishing map for more details.
It also helps to know when and where rainbows  were last planted, the bigger browns  will move in to feed on the small catch-able trout.
Brookies, too?
Our fishing map shows that the  east end of Upper Twin is  also known for great brook trout fishing.  Worms work well, but you should also try out   ﬂies, we can tell more below.
Top Fly Fishing at Twin Lakes, too!
Twin Lakes is also one best lakes in California’s Eastern Sierra for ﬂy ﬁshing. According to our fishing report, the best place for ﬂy ﬁshing is on the top end of Upper Lake.
There’s a sandbar there that provides excellent location for casting. See our fishing map for more details. Fly ﬁshermen can ﬁsh from the bar, and Zug Bugs, Tan Emergers, and Gray Hackle in Yellow, with no flotation gunk is recommended.
There are weed beds below the surface, the ﬁsh go in there to feed on the nymphs. Use the same patterns in small 14s, 16s and  ﬁsh in around them.
More favorites in the summer are California Mosquitoes and Royal Coachmen.
Another top territory for ﬂy ﬁshing on the Upper Lake is the cove on the  southwest side.
Because trout are feeding heavily on nymphs throughout the lake, surface trolling with ﬂies is almost as effective as casting  from the bank. Favorite ﬂies are black and olive Woolly  Worms, ﬁshed alone or on a trailer leader behind a spinner.

Click on a county for a listing of public land and contact info for Hunting Clubs/Ranches, and many more Maps!alifornia and Oregon Private and Public Hunting and Fishing Information:

Information on Hunting and Fishing Clubs and Ranches in California and Oregon:

If you want a more specific, county by county description of Oregon and California Hunting Clubs, Ranches and public areas to hunt and fish, you need to see:
www.ranchhuntandfish.com